Charged with Possession of a Narcotic in British Columbia, Canada? Understand What It Means 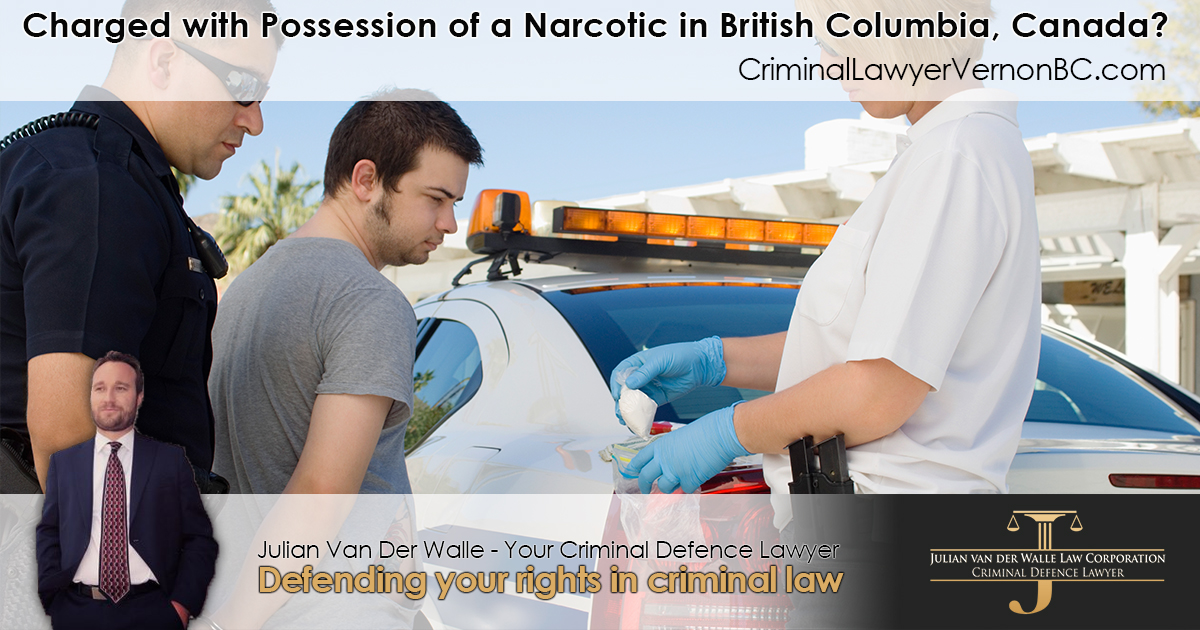 Under Canadian law, the Controlled Drug and Substances Act makes it illegal for anyone to possess certain narcotics. The law allows Crown Counsel to bring a criminal case against violators, which can result in criminal fines and even time in jail. Despite the fact that the law is well known, few first-time drug offenders have any real knowledge of the inner workings of the law or what it means to be charged with a drug offense.

About the Controlled Drug and Substances Act

The Controlled Drug and Substances Act, previously known as the Narcotics Control Act, prescribes criminal penalties for certain drug offenses. The Act provides a list of schedules which list and categorize the drugs and narcotics that are illegal and restricted. The penalties for possessing certain drugs are higher than those for possessing other drugs. The federal government and Crown Counsel is responsible for the prosecution of drug offenses rather than local British Columbia officials.

What is Considered “Possession” of Drugs?

Like all other crimes, drug possession must be specifically proved before any criminal sentence is levied against the accused. The Crown Counsel must prove two things before a court will find a defendant guilty of drug possession. First, the offender must have had physical possession of the drugs. Physical possession does not necessarily mean having them in bodily contact, but they must be somewhere that the accused controlled, such as in his or her motor vehicle. Second, the Crown Counsel must prove that the offender knew he or she had an illegal substance. For example, if the accused actually believed that he or she had a bag of sugar, the court will find a not guilty verdict.

The Controlled Drugs and Substances Act categorizes illegal drugs into schedules, which will result in different punishments for possession. Schedule 1 drugs are the most serious and will result in the greatest charges. The schedule 1 drugs include opiate derivatives (such as heroin or oxycodone), cocaine, and methamphetamine. Schedule 2 is primarily dedicated to different strains of marijuana. Schedule 3 includes many other drugs such as hallucinogens like LSD and will result in the lowest criminal penalties for indictable drug offenses.

Like with many criminal offenses, Crown Counsel has certain discretion in deciding how to charge criminal defendants charged with drug possession. Crown Counsel can either seek a simple summary conviction, which carries lesser criminal penalties, or he or she can seek a formal criminal indictment. Most first-time possession charges are dispensed by summary conviction procedures, whereas the more serious crimes such as drug trafficking will always be indicted.

For first time offenders subjected to the summary conviction procedure, the maximum possible penalty is a $1,000 fine and six months in prison if the defendant is found guilty. Keep in mind that these are maximum penalties and that lower punishments are often levied. Most penalties for possession charges of widespread narcotics such as marijuana are often as low as a $500 fine and probation. For non-fist offenders, the maximum penalties are doubled to a $2,000 fine and up to one year in prison.

When an offense is indicted by the Crown Counsel, he or she can seek more serious penalties. Indictments generally are sought for more serious drug charges such as trafficking and manufacture of drugs but are also occasionally sought for the mere possession of more dangerous drugs like heroin or cocaine. If Crown Counsel proves that the criminal defendant is guilty using the indictment procedure, the maximum penalty can be up to seven years in prison.

Finally, certain factors can aggravate the charges and result in additional penalties. For example, if a criminal defendant was trafficking narcotics for a criminal organization or if the criminal defendant was using a weapon, additional charges can be brought. The location of the drugs can also result in increased penalties. Attempting to sell drugs near a school or selling to a youth can also constitute aggravating factors.

Have you been charged with Possession of a Narcotic in BC?

Call Julain today to discuss your rights and defend your case.