Understanding Your Rights at a Roadblock 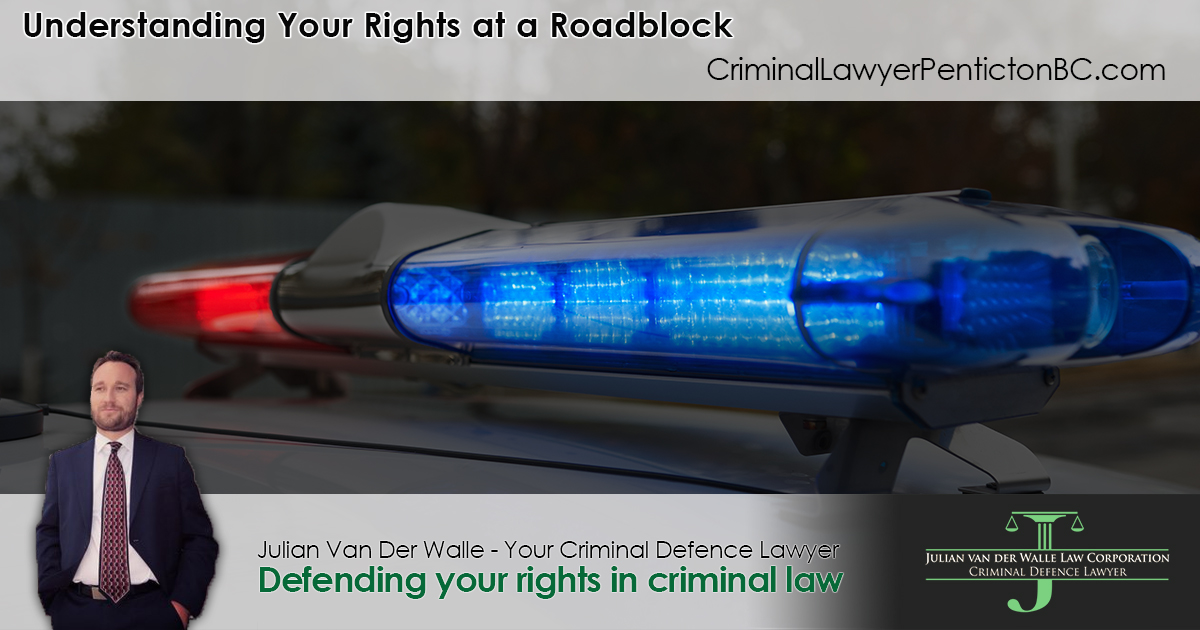 Roadblocks are a tool commonly used by the police in Canada to detect traffic infractions and alcohol violations on a large scale. In most cases, drivers will see roadblocks set up on major roads on holiday weekends or late at night around the time when bars begin to close. The roadblocks are a legal means of police traffic control, but they can become a legal problem for motorists who do not understand their rights when questioned by the police.

The experience of most motorists at roadblocks includes merely an identification, registration, and insurance check. However, depending on the circumstances, the police have the authority to ask additional questions. For example, if the police suspect that the driver is intoxicated, they may ask whether the driver has consumed any alcohol. Similarly, if the police smell marijuana, they may ask about the presence of narcotics in the vehicle. Confrontations with police like these at roadblocks can quickly escalate to an arrest if you do not understand your rights. This article seeks to shed some light on both the extent of actual police power at roadblocks and your rights as a driver when questioned.

The Legal Authority for Roadblocks in British Columbia

The Motor Vehicle Act is a law that governs the regulation and punishment of traffic offenses in Canada. In addition to stating the laws related to traffic offenses, however, it also grants the police authority to set up roadblocks to screen for illegal activity. This authority has been considerably constrained by the Supreme Court of Canada. The Supreme Court has ruled that police authority is limited to asking for license, registration, and insurance information at roadblocks unless the police suspect ongoing criminal activity. In the most famous case involving roadblocks, R v. Mellenthin, the Supreme Court of Canada ruled that unless there are further reasonable and probable grounds to suspect a crime, officers at roadblocks should only check for:

Rights at a Roadblock: the Right to Remain Silent

As the Supreme Court of Canada has constrained the police’s authority at roadblocks, all motorists have certain rights when dealing with police in the context of a roadblock. The most important of those rights is the right to remain silent and not answer any questions that you do not have to answer. As explained above, the police are only legally allowed to ask questions about five different topics unless they suspect some other ongoing criminal activity. Therefore, you should feel comfortable not answering any other questions asked by the police at a roadblock.

That said, most police questions are well-intentioned, and there is certainly nothing wrong with having a friendly chat with a roadblock police officer. The important thing to remember is that you can stay silent if you feel that you need to do so.

There are many different ways that police officers at a roadblock can begin to suspect criminal activity. For example, a police officer could smell fragrant narcotics like marijuana or the officer could spot contraband by looking through your vehicle windows. If police suspect ongoing criminal activity, they are allowed to ask additional questions and pursue a criminal investigation. That said, there are legal rules that govern these additional police searches, and when police do not follow those rules, you can challenge any legal action taken against you.

The most common violations of the rights of motorists occur where the police begin a full investigation despite having only a mere suspicion of wrongdoing. While a mere suspicion allows the police to ask additional questions, it does not allow the police to either search the vehicle or search the motorist. In other cases, evidence gathered at roadblocks can be suppressed in court if the roadblock was improperly set up.

Generally, speaking, it is not a good idea to avoid or flee from a roadblock if you have nothing to hide. That said, regardless of your reasons for choosing to do so, you are generally allowed to avoid a police roadblock by turning down side streets. If you are already approaching a roadblock, however, it is not a good idea to take sudden evasive maneuvers such as making a U-turn to avoid the roadblock. It is always illegal to flee from a police roadblock once you have been stopped by the police.