Is Impaired Driving a Criminal Offense?

← How Legalized Marijuana Will Affect You Why do you have the right to remain silent? → 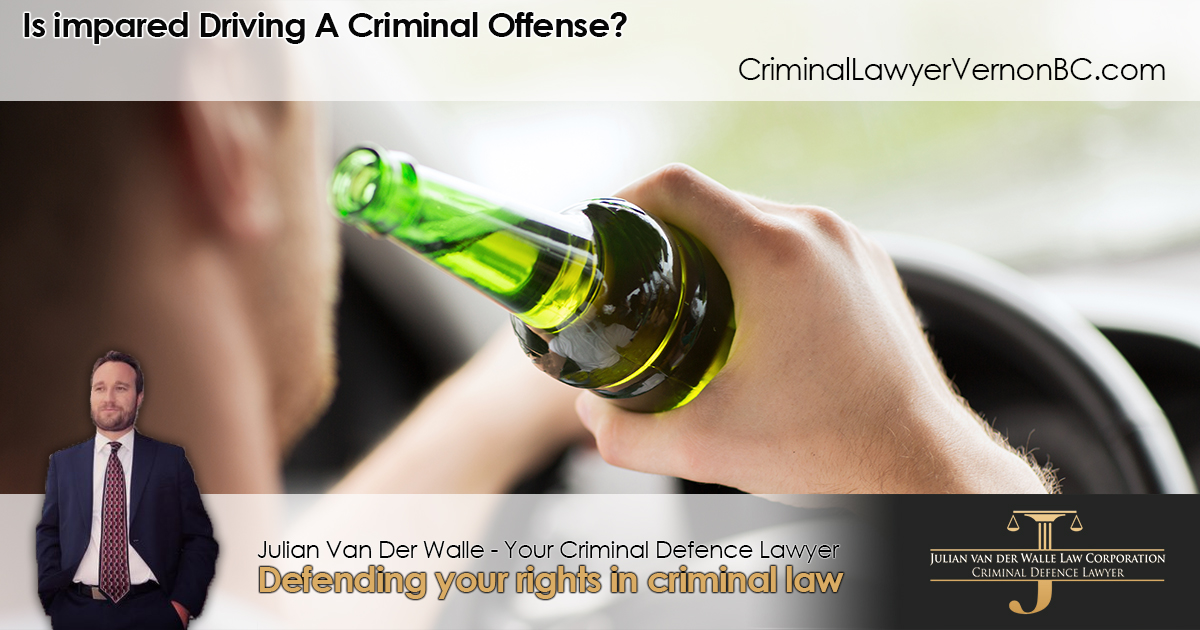 Driving a motor vehicle under the influence of either alcohol or narcotics is a very serious issue both from a legal standpoint and from a safety perspective. Intoxicated motorists create genuine road risks to both themselves and other drivers. The real public safety concerns accompanying drunk driving incidents have understandably resulted in a strong public policy response that may affect you.

What Is Considered Criminal “Impaired Driving”

Driving while impaired is a criminal offense where the driver of a vehicle is driving while under the influence of some type of external mental impairment. The most common form of criminal impaired driving is driving while under the influence of alcohol. Alcohol is a depressant that causes blurred vision and reduced reaction times. People who drive while highly inebriated are particularly dangerous on the roads because their perception of other drivers and the road itself is often skewed.

Other forms of impairment can also be punished criminally. For example, driving under the influence of narcotics such as marijuana or more serious drugs such as cocaine, heroin, or hallucinogens can result in criminal impaired driving violations. Similarly, abuse of prescription medications can result in mental impairment that can also be punished criminally. However, simply driving while tired or driving while stressed are not considered “impaired driving.”

The Societal Costs of Impaired Driving

Deaths related to impaired driving are considered to be a very serious public health crisis. While drinking at parties with friends is a normal social experience, it is easy to overlook the real costs of an inebriated person’s failure to abstain from driving.

In British Columbia, more than sixty deaths are attributable to impaired driving accidents. Such fatalities account for roughly 25% of all motor vehicle accident fatalities. The majority of those deaths occur in summer months; however, a large portions of deaths also occur during the holiday season. Impaired driving incidents also occur more often on weekends and Fridays during the night time.

The sad reality is that each and every annual impaired driving fatality is preventable. Given proper planning and common sense, no one should ever need to drive while intoxicated.

The Personal Costs of a Criminal Impaired Driving Offense

One of the most common impaired driving punishments is a 24-hour driving suspension, which can include a vehicle impoundment. As the name implies, a 24-hour driving suspension results in the termination of the offender’s driving privileges becoming revoked for a 24 hour period. Such a suspension may not seem too terrible of a punishment, but it can become extremely inconvenient in many circumstances. This is particularly true for motorists that have lengthy commutes to work every day.

In addition to the standard driving suspension, fines can also be levied against offenders. The amount of fines can range from $600-$4000, which is far greater than the cost of hiring a taxi or ride sharing service. Additionally, those who drive impaired will accumulate driver penalty points and may receive time in jail.

The Cost of Being a Repeat Offender

The British Columbia government believes that repeat offenders of impaired driving violations are a particularly dangerous roadway menace. As a result, the Driver Improvement Program was established as a type of government intervention into dangerous impaired driving behavior patterns. Repeat offenders are subjected to this rehabilitation program to force drivers who are constantly impaired while driving to alter their behavior.

Repeat impaired drivers are selected for the program based on either a record of impaired driving convictions or the accumulation of large numbers of driver penalty points. The type of intervention action taken will depend on the severity of one’s driving record. For example, two-time offenders will likely receive warning letters, whereas more regular offenders will be placed on driving probation or will be prohibited from driving altogether. In some cases, repeat offenders may also be asked to attend driver rehabilitation and re-education seminars.

If Drinking, Make Sure to Plan Ahead

The safest way to avoid an impaired driving citation is to plan for a fun night out ahead of time. The gold standard in impaired driving safety is to arrange a designated driver. Not driving after drinking socially is easy if access to a vehicle is not readily available but for the kind services of a pre-arranged designated driver. Alternatively, taxis should be used whenever alcohol consumption has occurred.

es, such as appearing on your driving record that are also important considerations.

The Procedure for Receiving a 24-Hour Alcohol Prohibition

The Effect of a 24-Hour Driving Prohibition

How Can I Challenge My Prohibition?

If you believe that the prohibition was wrongfully given, you do have rights of appeal. First, you can appeal your 24-hour alcohol prohibition to an adjudicator working for RoadSafetyBC. This type of appeal is not a formal court appeal, but is rather an administrative appeal. If the adjudicator does not agree with your version of events, you can appeal further to a justice of the BC Supreme Court. If your prohibition was given for drug influence, however, your only right of appeal is directly to the BC Supreme Court – there is no intermediate appeal to an adjudicator for drug-related prohibitions.

If you have received a 24-hour driving prohibition, you should contact an experienced criminal lawyer as soon as possible if you want to appeal the prohibition.