Why do you have the right to remain silent?

← Is Impaired Driving a Criminal Offense? What to Expect from Your First Experience in the Canadian Justice System and Criminal Trial → 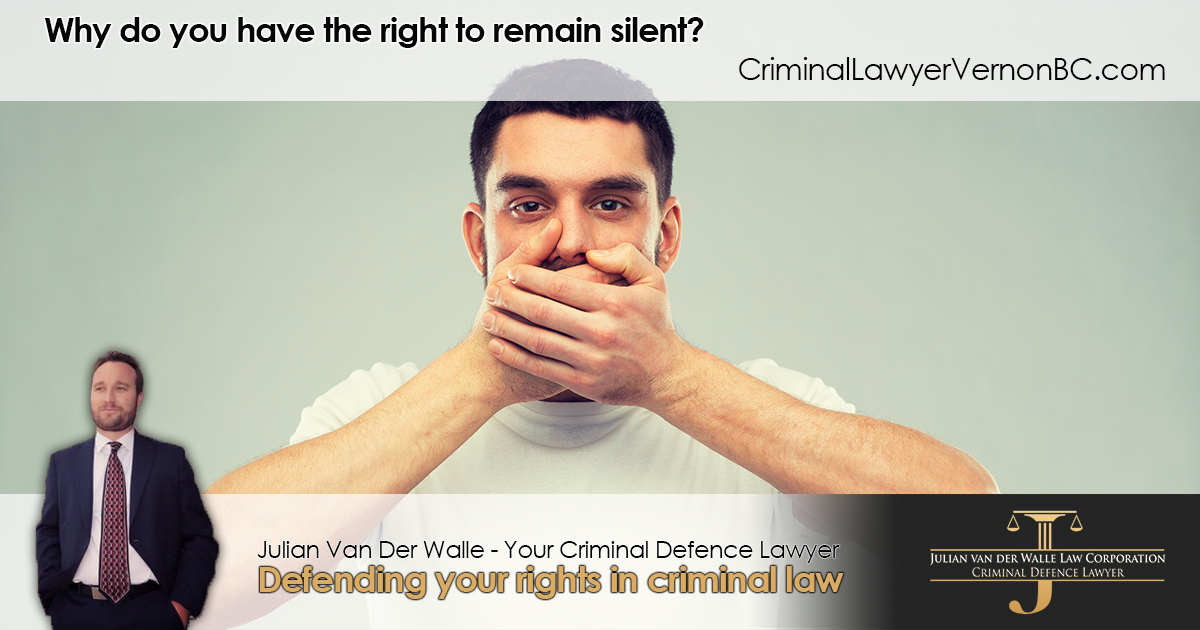 The Presumption of Innocence and Police Conduct: Why You Have the Right to Remain Silent

Section 7 of the Canadian Charter of Rights and Freedoms guarantees all citizens: “the right to life, liberty, and security of the person and the right not to be deprived thereof except in accordance with the principles of fundamental justice.” Under this principle, all people are presumed innocent until proven guilty in a court of law. This means that even a suspect who walks into a court with all the weight of the evidence in the government’s favor is innocent until he or she is actually pronounced guilty.

This principle results in two different rights that police suspects have during the criminal investigation process: the right to remain silent and the right to not be required to give evidence of guilt to the police. These rights are fundamental to the Canadian justice system. Everyone should know and understand these rights, lest they find themselves in contact with the police.

The right to remain silent means simply that a criminal suspect does not have to talk to the police and may remain silent during a police interrogation. There are many reasons why someone may not want to talk to the police. The most obvious example is where the criminal suspect actually did commit the crime that he or she is accused of. However, other people may not wish to talk to the police for a variety of reason. Perhaps the suspect wants to protect the actual perpetrator. Perhaps the suspect is guilty of some different crime and simply does not want to say anything to the police to avoid tipping them off. Regardless of the reason for staying silent, the ability to stay silent during a police investigation is a fundamental Canadian right.

The right to not be required to give evidence of guilt to the police is a corollary right. In Canada, it can be a crime to lie to the police, as such lies could result in additional charges, such as obstructing justice. If there were no right to remain silent, criminal defendants would be forced either to confess to the crimes that they committed or face additional charges relating to lying to the police. As most criminals do not want to immediately confess their guilt, almost every police suspect could hypothetically face charges additional charges.

The Public Policy Behind the Existence of These Rights

In general, rights are given to criminal suspects by Canadian courts in response to a problem. One of these problems was the previously-discussed conundrum between being required to talk and facing additional charges of obstruction of justice. However, the real benefit of the right to remain silent is to restrict the ability of the police to use unethical tactics.

Prior to the recognition of the right to remain silent, the police were well known for using creative tactics to elicit confessions. It was not uncommon for the police to lie to suspects about what they knew and did not know. Additionally, while the police have never been allowed to torture a criminal suspect, they would use certain torture-like methods of convincing suspects to talk such as holding them for hours at a time in uncomfortable chairs or using aggressive questioning techniques. The right to remain silent reaffirms that criminal suspects do not have to talk to police under any circumstances.

The right to remain silent also places limits on the ability of police informants to elicit information from suspects. In general, in a police informant is acting at the direction of the government for the purpose of eliciting a confession, the confession can be thrown out by the court and excluded from evidence. This issue is complicated, however, and does not begin and end with the right to remain silent.

If you have additional questions about your rights during a criminal investigation, you should contact Julian Van Der Walle via phone, web chat or fill out the form at the bottom of this site.